Stephen is the king of mashed potatoes! He makes them so fluffy and smooth , his secret is lots of milk and butter and once mashed with a masher to use the hand mixer - they always come out divine! The only downside is that he manages to decorate the kitchen with potato!

I decided to have a go at making some fishcakes over the weekend and made more mashed potato than even Stephen could eat in preparation for the fishcake making. In the past when I have made them they have fallen apart and I think this is due to them not being wet enough, this time they turned out perfectly. I had bought some Salmon that needed eating up so grilled this and added them to the mashed potato along with spring onions, leftover green beans, sweetcorn, chives and feta cheese. once it was all mixed together I left it in the fridge for a couple of hours.
Once they were chilled I neeed to coat them and couldn't remember which order to dip them in - was it egg first ? or flour? I turned to the trusty BBC food website (don't know what I would do without this!) It's Flour,egg then bread crumbs! I then shaped them into large patties ( making some teeny tiny ones for Molly) set up my 3 dishes of flour , egg and breadcrumbs.( In the breadcrumb mixture I also added some fresh grated pecorino cheese and a teaspoon of paprika for a bit of ooompf.) I used my hands to get really stuck in and ended up with mixture all over me - I looked like I had swollen fingers - bleughhh. 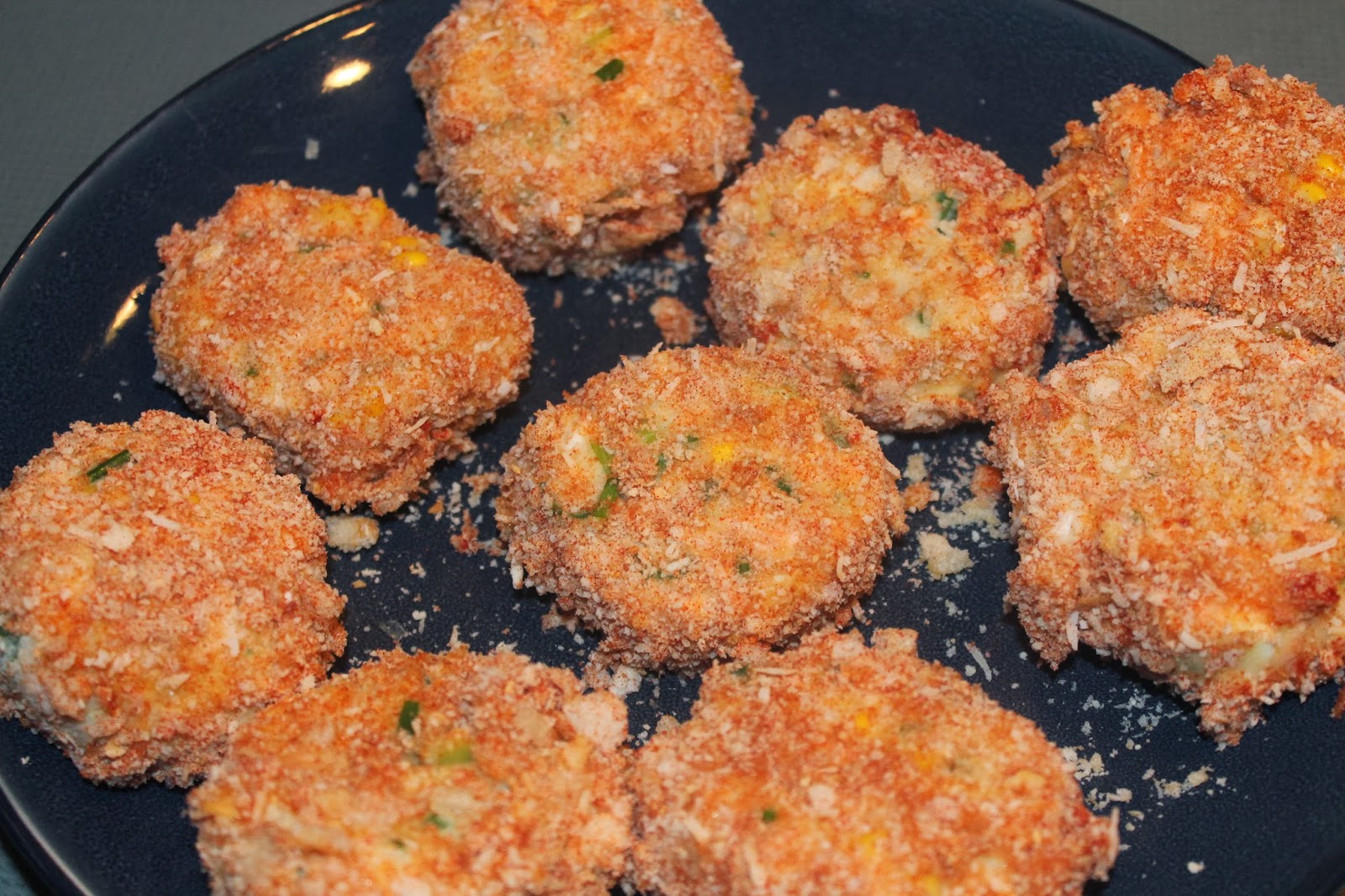 These are them ready to be chilled again. 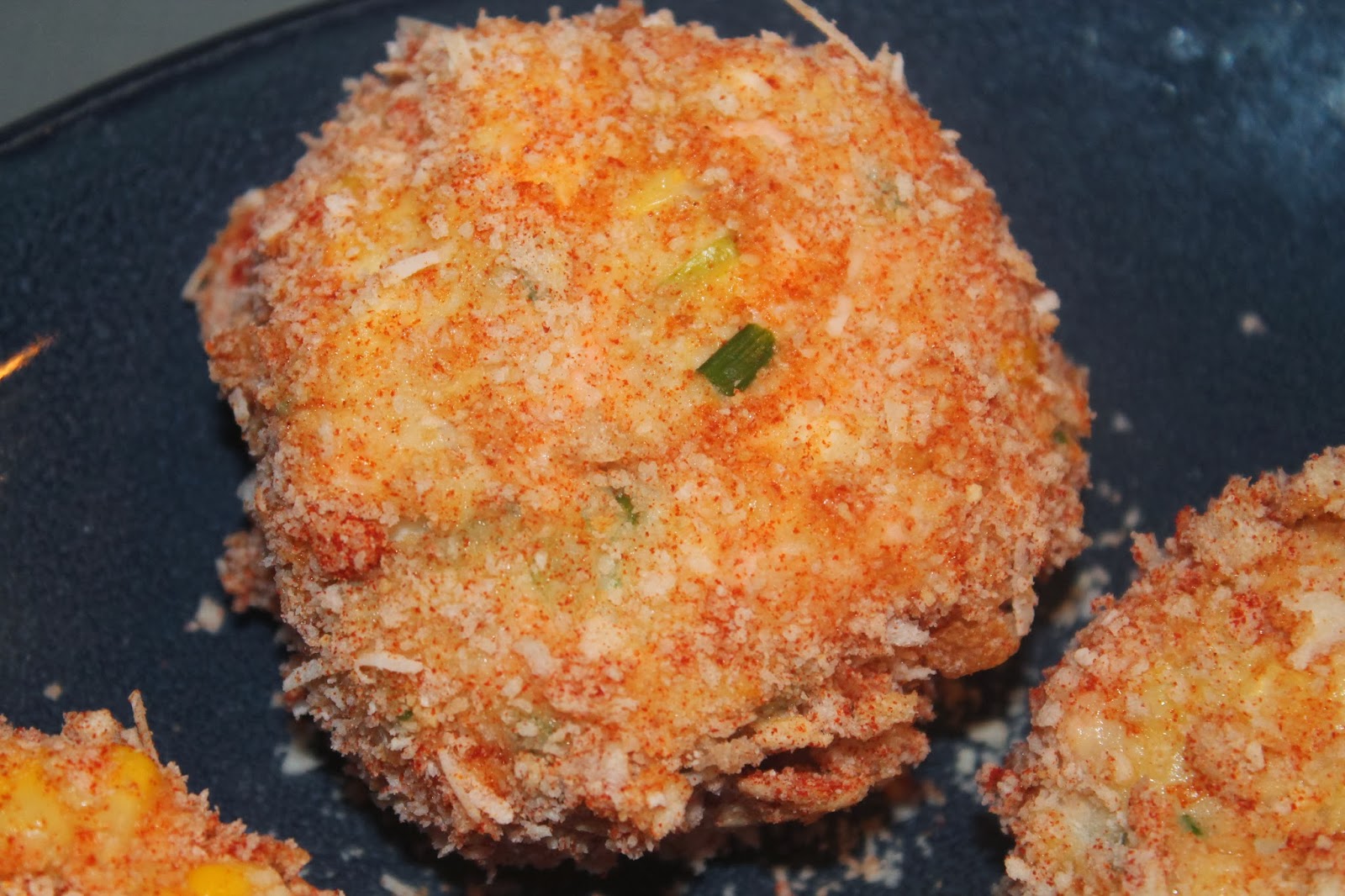 A close up with a speck of chive poking through! 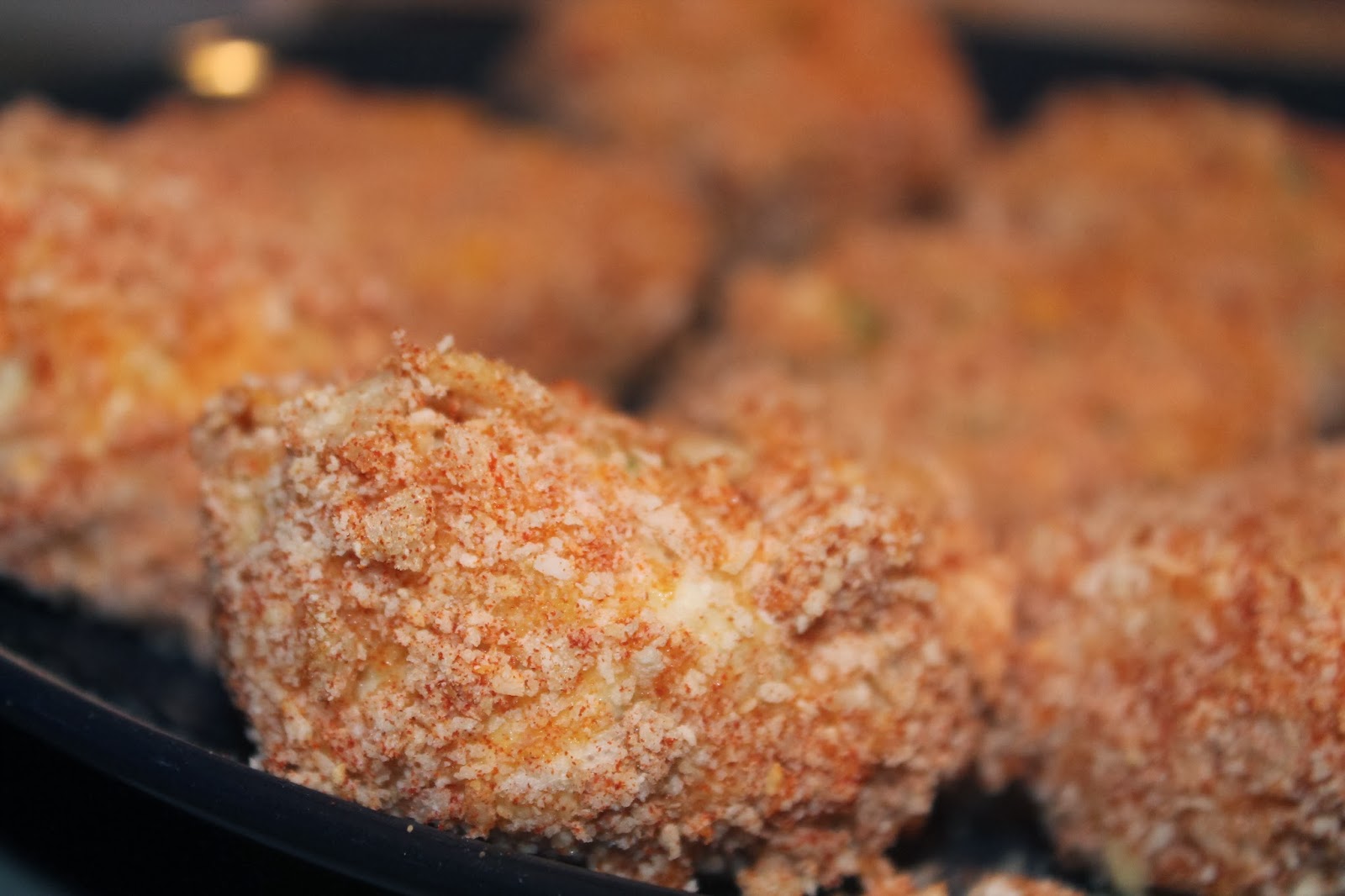 another close up - you can never have too many!!
For Molly's little fishcakes I experimented and did a couple in the frying pan and a couple in the oven to see which came out better and the oven baked ones were the best - also they didn't smoke out the house which frying always does!
So the adult versions were drizzled in a little olive oil and put in the oven to brown and sizzle.... 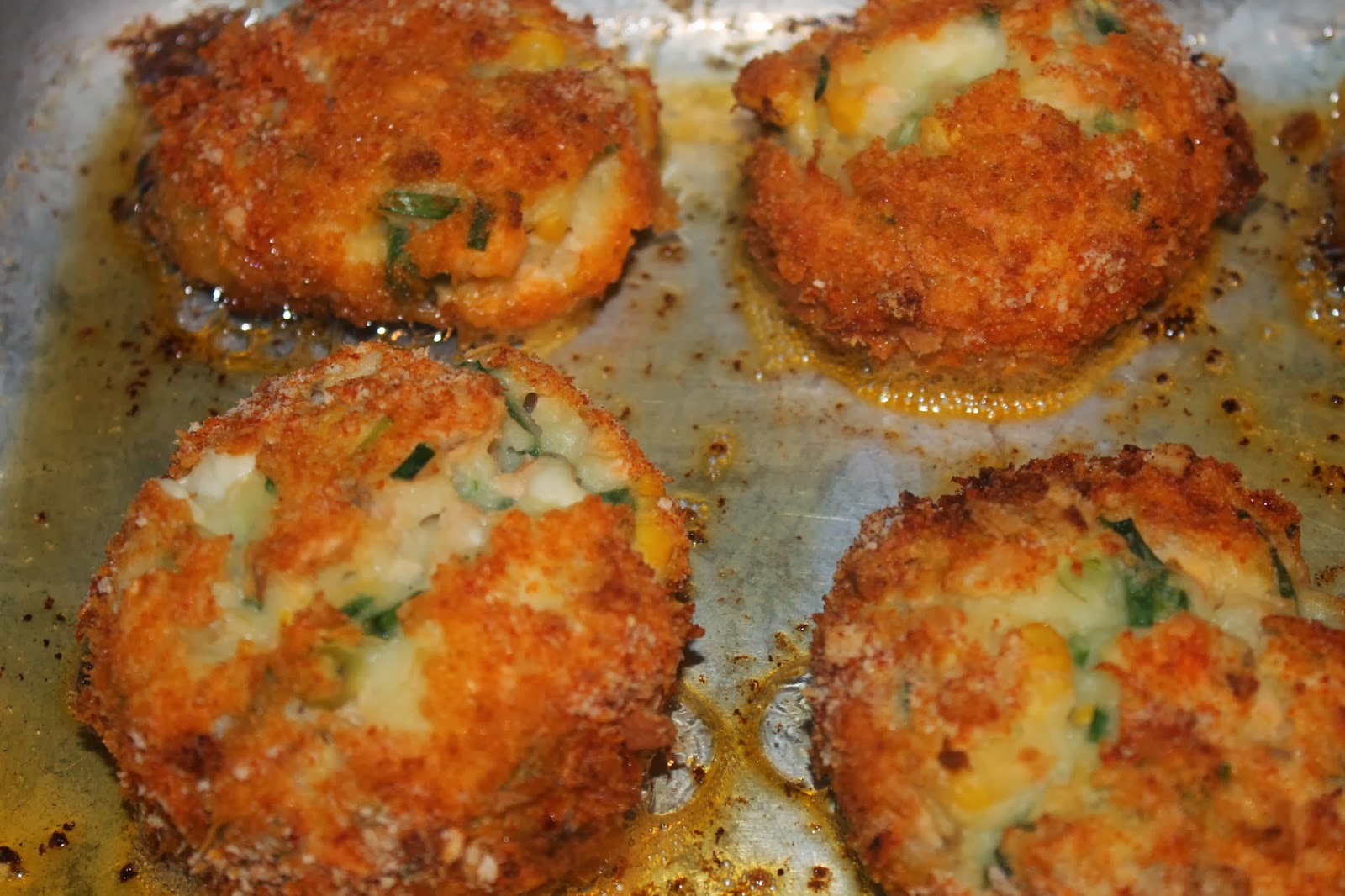 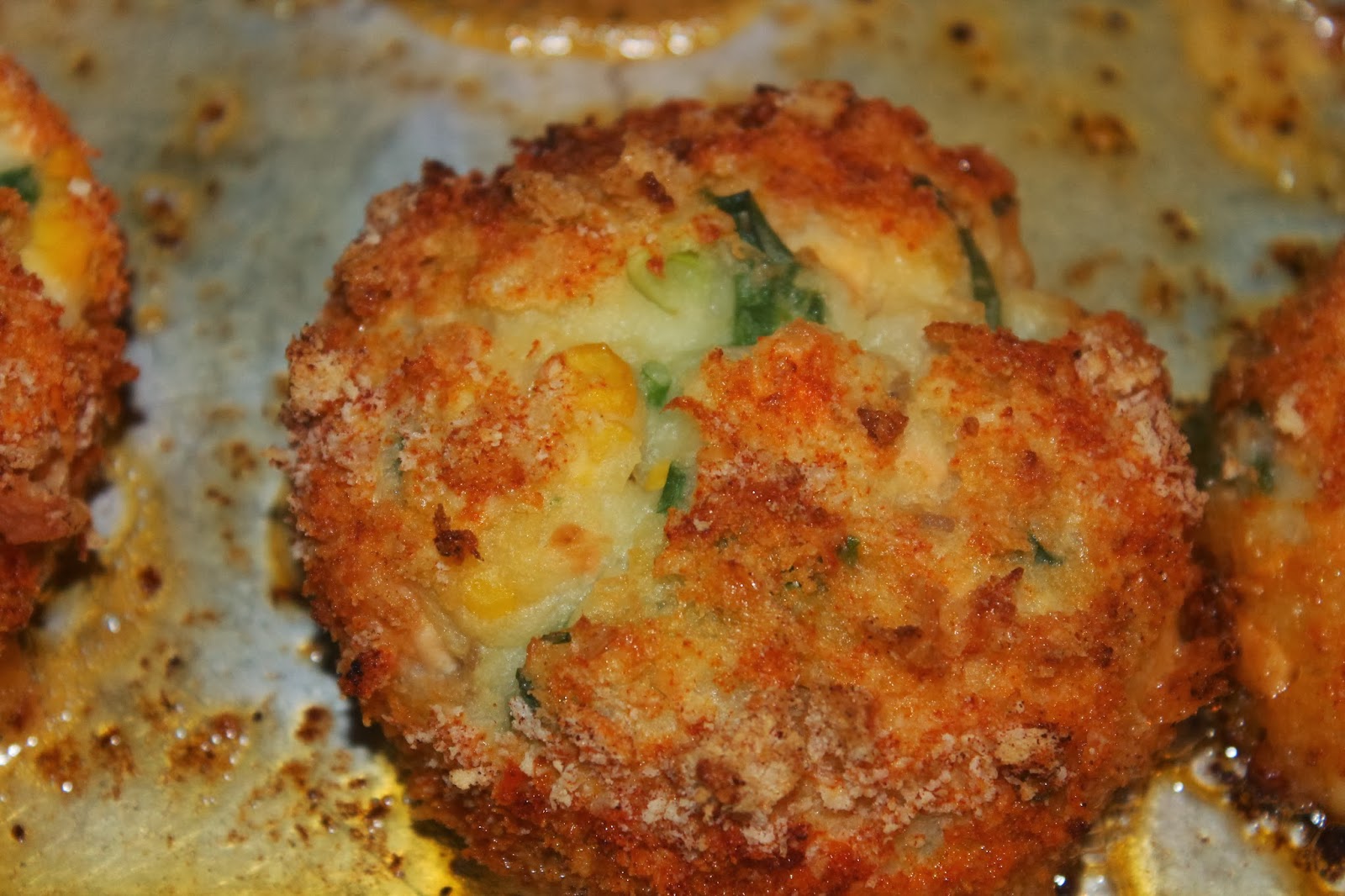 Another close up - this one bursting its seams with yumminess 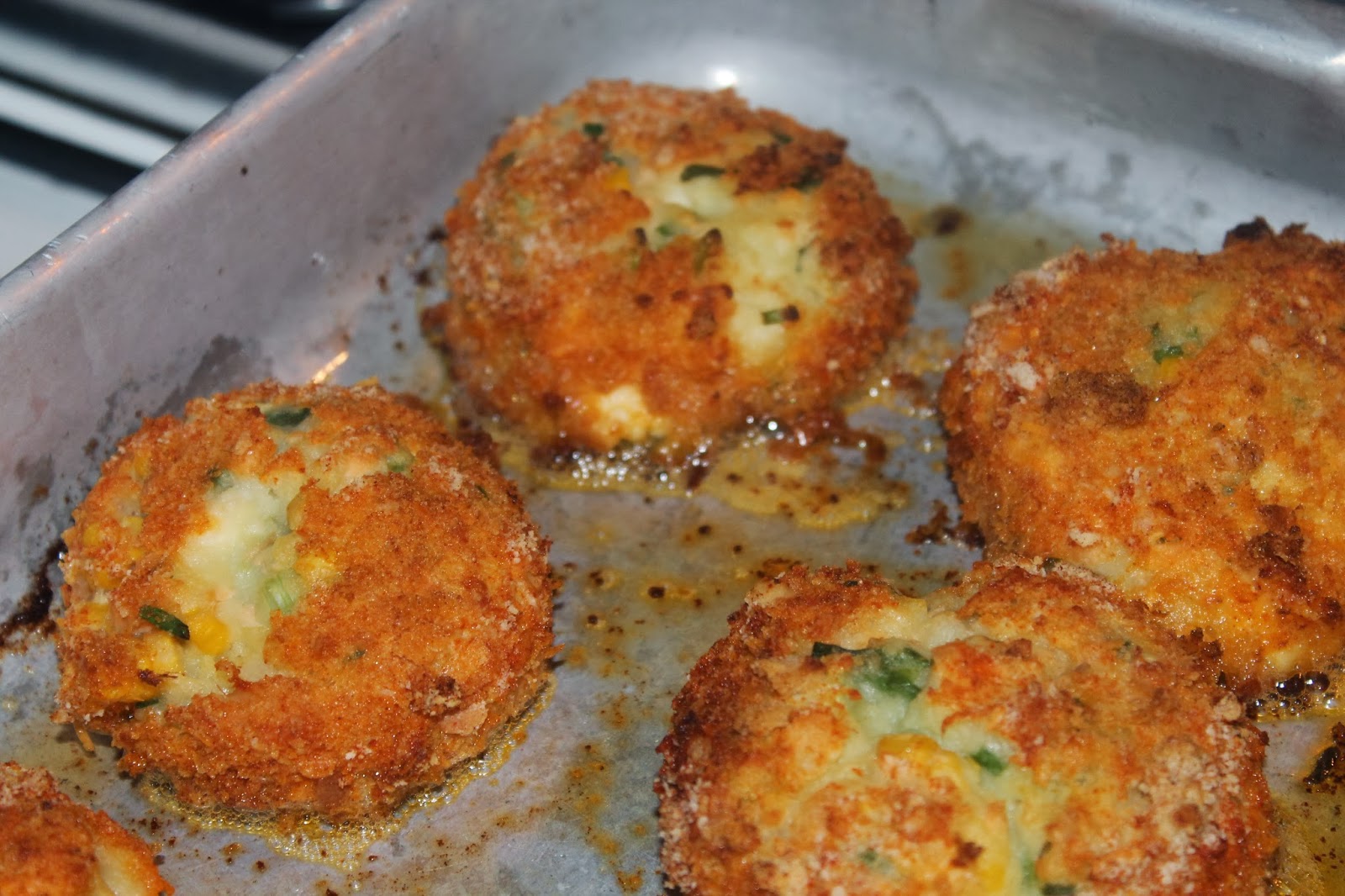 Overall they were a definite success, they didn't collapse and weren't too dry - the paprika added a lovely smokiness to them , the feta cheese was a lovely surprise to bite into,  I made too many to eat in one go so have frozen some for another day ... Molly didn't like hers though and preferred a banana! Oh well you can't please everyone! Will make these again and play around with the fillings - sundried tomatoes, smoked fish, sweet potato are possibilities as well as adding some cheesy filling.
I am going to enter some blogging challenges this month so shall be entering this into Lavendar and Loveage February challenge which is to cook with herbs and this months theme of Chinese and romantic inspired recipes with herbs - although this isn't Chinese it was for a romantic dinner with Stephen! To see the other entries click here.